Galleria Patricia Armocida presented The Folding of a Known World, a collective exhibition by Swoon, Monica Canilao, and Dennis McNett, that opened on Wednesday April 11th 2012.

Sixty medium and large-scale works were on display, including pieces created by the artists together. The figures were brought to life within the three room, site-specific installation built in collaboration with Harrison Richards Bartlett.

The title stems from reflections on various stories about the creation, preservation and destruction of the world, along with their numerous myths and characters. Currents of thought with endless subtleties which, once discovered, cause the world as we know it to fold upon itself revealing a new one where anything is possible. With the intention of also highlighting a present-day issue: the world is in fact collapsing upon itself. According to scientists, the sixth mass extinction is imminent and human beings are its cause; we must acknowledge that we’re in danger and do something to reverse it.

The three artists elucidated this through their works and the characters they’ve created: Thalassa, the goddess of the sea, Fenris, a giant wolf from Norse mythology, or the crows depicted on precious embroidered fabrics, animals have long since been considered intermediaries between the terrestrial and spiritual worlds. They build a temple which alludes to a world of supernatural powers, a mythological reality within which exists a dualism embodied by Kali, the mother goddess and goddess of destruction.

“Folding" also literally refers to the action itself: the artists fold fabric and paper, creating a fantastic world inhabited by figures brimming with symbolic, personal, and emotional connotations. The works emit vital energy germinated from destruction, in perpetual transformation, creating a continuity with no starting point.

Monica Canilao creates new forms and intricate works with salvaged objects and weathered images. Her mixed media works, installations, and sculptures revitalize broken-down forms and celebrate the spirit of mutual aid, the idea of home, community and resourcefulness of marginalized peoples. She is fearless in her use of unconventional and found media. A new series with scavenged 19th century parlor portraits rebuilds narratives of forgotten lives using paint, copper, feathers, lace and other found materials. Using intricately layered organic and constructed materials, Monica’s pieces pay homage to traditional handicraft as well as fine art. She says of her work: “My art practice generates a personal and living history that can be altered and reconsidered. It is a mode of communication with others transcending distance, time, and place”.

Dennis McNett is known for his skillfully carved wood works. His roots plunge into the aesthetics of the early 1980s skateboard and punk rock scene, he draws from references that are modern and graphic, yet at the same time are imbued with ancient mythology and fairy tales from the Nordic culture, which inspires the intensely symbolic animals he depicts, such as wolves, leopards, crows, and eagles. Within his work, ancient and modern coexist, thus allowing viewers to come into contact with their ancestral side.

Caledonia Dance Curry, aka Swoon, was born in New London, Connecticut in 1978 and grew up in Daytona Beach, Florida. She graduated from the Pratt Institute (1998-2001) in Brooklyn, where she now lives and works. While studying painting, she mastered wood cut techniques and began putting up her works on the streets and launched community projects with other young artists. In 2005, Jeffrey Deitch’s New York gallery hosted her first solo show, which received rave reviews from The New York Times. Swoon then became an internationally renowned artist whose works were purchased by the MoMA (New York, 2005) and by the Brooklyn Museum of Art (New York, 2006). Her works belong to prestigious collections in the Massachusetts Museum of Contemporary Art, PS1 Contemporary Arts Center in Long Island City, The Russian Museum in St. Petersburg, and Tate Modern in London. Swoon is also engaged in humanitarian and educational projects (Haiti, Zambia). She has spent the last few years designing, building, and organizing a fleet of boats made from reclaimed materials, the original project was called “Miss Rockaway Armada”, and more recently, “Swimming Cities of Switchback Sea” and “Swimming Cities of Serenissima”, a monumental installation of floating sculptures exhibited in 2008 at Deitch Projects gallery in New York. Two of these rafts were then rebuilt in Slovenia and sailed to Venice for the53rd Biennale in 2009.

Monica Canilao was born in Redwood City, California. She attended California College of Arts and Crafts where she received her BFA in illustration. She lives and works in Oakland, California. She was recently named artist of the year by East Bay Express, as well as awarded a Eureka Fellowship by the Fleishhacker Foundation. Each year her works are shown in several international galleries. She travels to every large show to build site-specific, immersive installations.

Some noteworthy exhibitions: “The Folding of a Known World” Galleria Patricia Armocida, Milan (2012); “What's Lost is Safe” at Sky High Gallery in Milwaukee (2011); “We are Dust” at Cinders Gallery in Brooklyn (2011); “The Dispossessed” at Needles and Pens, Oakland (2006). She has also collaborated with important artists such as Swoon and David Ellis in collective exhibitions like “Heap” at Black Rat Project Gallery in London (2007), “Feral” at The Luggage Store in San Francisco (2008), and “The More We Wander” at Kretz Gallery in Malmö, Sweden (2011). Her work has been shown at Yerba Buena Center for the Arts and RVCA in San Francisco, Deitch Projects in New York, Di Rosa Preserve in Sonoma, CA, at the Oakland Airport, and many other spaces in the USA and around the world.

Dennis McNett was born and raised in Virginia Beach. He lives and works in New York. He has been carving block prints for over 20 years and he teaches at the Pratt Institute in Brooklyn. His work ranges from large Viking ship performances, to masks, installations, sculptures, and hand-carved wood cut pieces. His masks were recently exhibited at Victoria & Albert Museum in London. His work has appeared in The New York Times, Juxtapoz Magazine, and Complex Magazine. 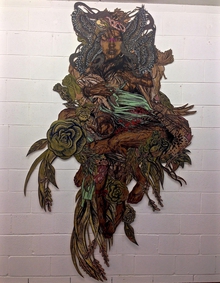 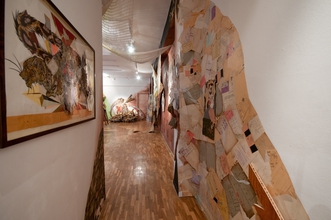 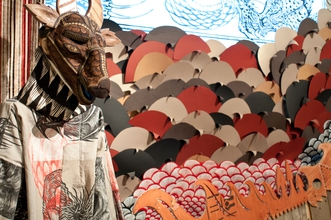 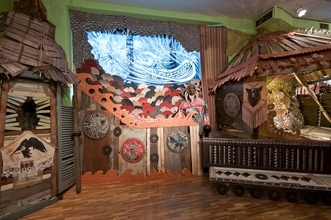 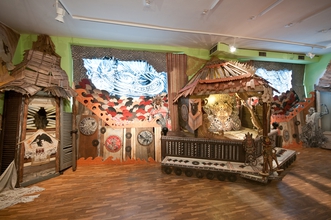 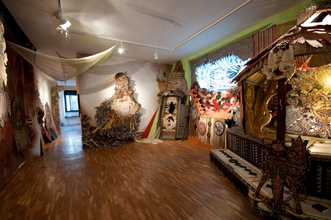 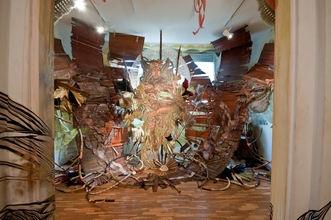 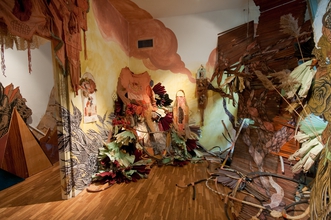 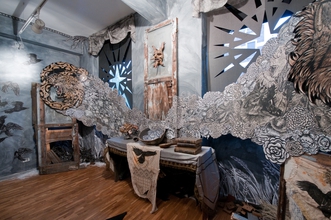 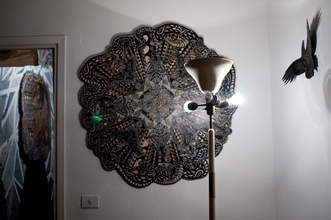 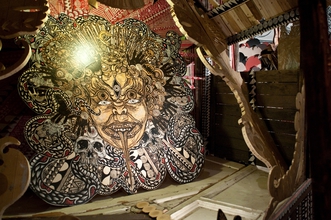