BLU held his first solo exhibition in Milan at Galleria Patricia Armocida on Wednesday, June 18th 2008, accompanied by a catalogue with text by Fabiola Naldi.

The exhibit, entitled BLU, took place in both outdoor and indoor spaces. The first part was displayed on three outdoor walls at Hangar Bicocca, in the Navigli district, and in district #3 of the city of Milan.

In the spirit of engaging more young people in the arts, Hangar Bicocca granted the use of a wall near its entrance, providing this young artist with the opportunity to “autograph” one of the most prestigious spaces for contemporary art in Milan.

Two different environments, created at different times, which revealed Blu interacting with urban surfaces (his primary endeavor), and a more analytical, pensive, and intimate side within the gallery. As Fabiola Naldi wrote in the exhibit catalogue: "A fundamental element of Blu’s work is the direct contact with the walls of the city, a privileged place and a perfect repository for testaments, actions, erasures and overwritings intended as the collective memory of a city that has become increasingly frenetic and less aware of what transpires around it.

With only the use of paint and brushes, Blu, through distinct, raw, and concise strokes, creates parallel figurative worlds in which strange characters with one face infinitely repeated, transform into another story, another thought, another contemplation about the reality which they, and we, experience and endure. That is what these aliens and alienated beings are: the perfect testimonial pretext, reflecting like a mirror, the reality of those who, astonished yet fascinated, can indentify with them.” 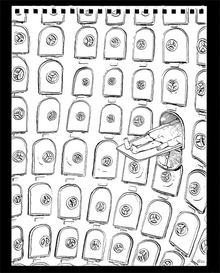