For this exhibition we wanted to express the sense of the show, using a very light paper that resumed the style of the forms created by the artists. The central fold, which makes the rhombus a triangle, resumes the folding that is mostly repeated in the artworks.
In particular, the hot stamp placed under the print serves to capture the gold sprays used on the works of Swoon, which is then printed in offset and then  finalized with laser embroidery and a final punch to make the shape of the rhombus. 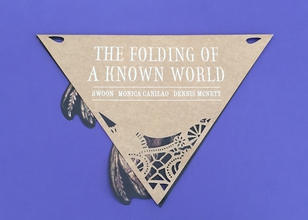 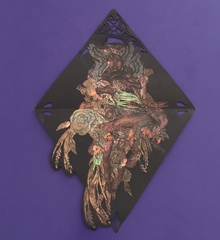